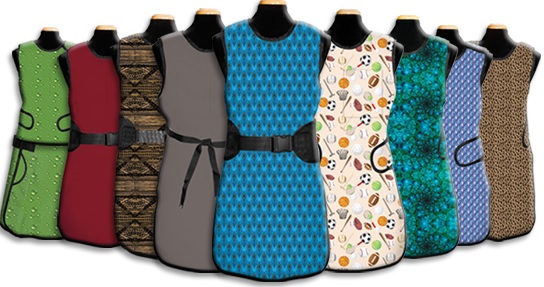 Lead aprons are part of the basic supplies for anybody who works around x-rays and, of course, for people who go in to get an x-ray as part of a diagnostic procedure. Lead is the material of choice because it provides excellent protection against electromagnetic radiation, like x-rays.

What goes on when an x-ray strikes a lead apron is actually, from a physical perspective, quite interesting. It’s a bit more complex than merely blocking the radiation (for info on apron care, see the apron care guide).

HOW A LEAD APRON WORKS

As anyone who has had an x-ray done or who has worked around x-ray machines knows, lead is extremely heavy. The heaviness stems from the density of the material. Lead is denser than iron, and in fact, it is very dense compared to most other materials.

That density means that the material is made out of tightly packed atoms, and that’s how it manages to prevent electromagnetic radiation in the form of an x-ray from reaching a patient’s body where no scan is being done.

What goes on inside the apron when the x-rays strike it is a conversion of energy. The x-ray strikes the electrons orbiting around each of the atoms in the material. When it strikes those electrons, it adds energy to them, sometimes bumps an electron out of its orbit and may create an ion. The electron can be captured somewhere else.

Some radiation is not particularly powerful. For example, alpha particles are a type of radiation (though not electromagnetic in nature) that can actually be blocked by human skin.

Beta particles (also not electromagnetic in nature), on the other hand, can penetrate skin, but they don’t require lead. These can be deflected by heavy clothing and other materials.

X-rays, however, are more energetic and they do require greater amounts of shielding to ensure safety. Patients, even if they are undergoing extensive scanning, generally are not exposed to terribly high amounts of radiation. The real danger is to the technicians who work on the x-ray machines.

The shielding that keeps x-ray techs and other worker safe doesn’t have to just come from a lead apron. Other types of barriers can be constructed that can block the radiation, allowing people to work around the machinery safely, even if they are giving many x-rays during the course of the day.

The reason that lead is used so extensively as a means of shielding against radiation exposure is simply because it is so dense that it doesn’t take a great deal of the material to actually block very energetic radiation. This might be a bit inconvenient, as lead aprons are far too heavy to be comfortable, but it is enormously efficient in terms of the amount of material required, and the cost.

Almost all of Eljay X-ray's "lead" aprons are available in a lighter, environmentally friendly, non-lead material.

Enough of any material will block just about any type of radiation ( fun fact -- if your apron were made out of steel instead of lead it would need to be 2 - 2.5 times thicker. Imagine wearing that to work!). Finding something as dense as lead – and as inexpensive – would be very challenging. Over the years, lead aprons have proven themselves to be an effective means of protecting people against x-ray exposure and, of course, that means that patients and physicians can benefit from this absolutely indispensable diagnostic tool, which truly revolutionized medicine in meaningful ways.